Andy Crisp had postnatal depression (PND) after the birth of his first child and feared it might reoccur after his second. Here’s what actually happened…

When your wife became pregnant with your second child, were you worried you’d get PND again?

I was certainly as excited as I’d been first time around, particularly as we’d struggled to conceive. We had started to come to terms with the idea of only having one child.

But the doubts were there right from the start. What if the PND happened again? Would I spot the signs?

Did you do anything differently before the birth to prepare yourself?

I aired my concerns. Both publicly, and to family and friends. My wife continually asked me how I was feeling. We talked really honestly and openly about everything. Many a night out ended in a drunken pep talk from one of my mates.

I also sought professional help, spending some time with a counsellor. We discussed how I was feeling and I tried to get into the right mind-set for the birth. That helped massively.

Being able to lay everything bare without fear of being judged or hurting someone’s feelings was really cathartic. It also dredged up some formative experiences from my childhood and teenage years, which might have shaped my experiences. Yet I’d not even given thought to them last time around.

What happened when your second child was born – how were things this time?

To say things were very different would be a vast understatement. While Ffion’s arrival didn’t go according to plan, ending in forceps and an operating theatre, Bronwen’s also didn’t end in the soothing environment of the midwife-led unit. Nope, she arrived like a rocket onto our bathroom floor.

You can find the full tale here. But suffice to say that after such a dramatic arrival, it was hard to imagine things getting tougher than that.

In fact, the role I played in the whole thing gave me that sense of purpose I’d lacked last time. From picking her up from the floor to cleaning the bathroom from top to bottom later. And a huge sense of pride, both of my amazing wife and, dare I say it, myself.

Being tucked up in our own bed, at home, with tea and toast within two hours of her birth felt like worlds away from what we went through last time. Then that feeling when Ffion got home from nursery later and came in to meet her baby sister. The pride and excitement that was written all over her face will stay with me always.

Did the way your children were born or the circumstances affect how you felt?

Without a shadow of a doubt. I think in both cases we had no control over the process, or at the very least, much less control than we’d hoped for.

While this was unbelievably positive with Bronwen, it had been quite scary and perhaps a bit disappointing with Ffion. Movies and TV have a lot to answer for. They create this distorted impression of the pregnancy and birth experience. It’s always so black and white on the screen, while things are so much more nuanced in real life.

The drama of the operating theatre created a sense of jeopardy after Ffion was born, which probably then meant I was all the more anxious to keep her safe. To push my paternal instinct to its limits, when it hadn’t even been formed yet.

Yet with Bronwen, that jeopardy was still there. Not least in the few seconds it took her to take her first breath. But the speed that everything seemed to go back to normal meant things were so much calmer.

Has this experience changed your views about anything in a wider sense?

I think it’s increased my sense of gratitude. To my wife, in particular. But also to my friends who have listened without judgment. And that both our girls are happy and healthy.

It’s made me kinder, more empathetic, more willing to share my own story in the hope it might help others.

It’s definitely made me more self-aware. And more determined to cut myself some slack. Not too much though, with two kids there’s always someone who needs my time and attention.

What would you say to other dads who had PND first time around and might fear it happening again?

I’d say that I understand. That it’s perfectly legitimate to feel that way. And that being aware of the risk is an important step to taking action. I’d urge them to speak to people. Their partner, family, friends and a professional if you get the opportunity.

Be kind to yourself, recognising your achievements so far as a parent.

I’d also warn them against redecorating the bathroom before the birth. Just in case... 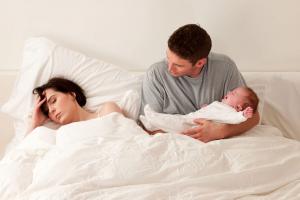 Spotting signs of postnatal depression in your partner Read article