Has my baby started teething? the signs to look out for 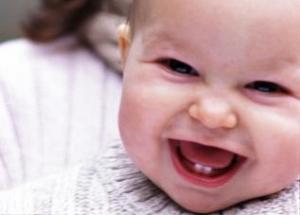 Teething signs can be confusing and you’ll hear so many myths. Here we explore what teething is exactly and the signs you'll see.

The dreaded teething. A journey every baby experiences in those first precious months and years. Yes your baby too (there’s no escaping it we’re afraid).

Unfortunately, teething happens at the same time as they are vulnerable to a number of other illnesses and ailments (Lyttle, 2015). This has led to confusion around what’s a sign of teething, and what’s not. Not just among parents but also some healthcare professionals (Macknin et al, 2000; Wake, 2002; Sarrell et al, 2005; Plutzer et al, 2012; Eisenstadt et al, 2017). In the words of all those babies out there...uh oh.

But first, the basics: What exactly is teething?

Teething is where your baby’s teeth start to emerge through their gums (Lyttle et al, 2015).

"The first milk teeth are already lurking under the gums when your baby is born, and they usually appear on the surface between six and nine months (Lyttle et al, 2015)."

Your baby’s complete set of pearly whites is usually on show by the time they’re three years old (Lyttle et al, 2015). For a full guide to which teeth appear and when, see our month-by-month teething article.

Teething: What are the signs?

A baby’s teeth sometimes appear with no pain or discomfort at all, phew (NHS Choices, 2016). But others experience a constant, dull pain that gets increasingly intense in the four days before a tooth pops through, before rapidly improving (Lyttle et al, 2015).

Your baby can’t tell you they are in pain (sad face), but you might see some pretty obvious signs there is a tooth on its way. The signs widely agreed to be sure indicators of teething include:

Other symptoms that might be signs of teething (although there is some debate over these) include: gum-rubbing; sucking; wakefulness; ear-rubbing; facial rash; and a runny nose. A mildly-raised temperature might also be a sign but it should not be over 38°C (Macknin et al, 2000; Ramos-Jorge et al, 2011; NICE, 2014; Eisenstadt et al, 2017).

Your baby might be showing one of these signs or symptoms, or all of them. As with everything baby related, no two little ones are the same (Lyttle et al, 2015). In fact, teething signs can be so wide ranging, and vary so much from baby to baby that only one third of teething infants would experience any one of the signs above (Macknin et al, 2000).

Some studies go as far as to say none of these symptoms can be proven to be a sign of teething. They suggest the only way to know if your baby is teething is to examine their mouth – looking and feeling for an emerging tooth (Tighe and Roe, 2007).

Try laying your baby on your lap and sneaking a peek inside their mouth by moving their top or bottom lip or gently coaxing open their jaw. Use a clean finger to gently feel around their upper and lower gums systematically, one potential tooth spot at a time.

And what’s not teething?

Other signs and symptoms people often associate with teething but that studies have found are generally NOT linked with teething include:

"It’s really important you don’t assume one of these is a sign of teething. It could be more serious and require medical attention."

A fever and other clinically important symptoms, like diarrhoea, rashes, and vomiting are very unlikely to be caused by teething, so make sure you talk to your GP or call NHS 111 (Tighe and Roe, 2007).

One study looked at 50 babies admitted to hospital suffering from teething. In 48 of these children, a medical condition other than teething was identified, including a case of bacterial meningitis (Tighe and Roe, 2007).

Right, I’ve established my baby is teething. Now what?

You can read our articles on how to ease the pain associated with teething, and top tips proven to work.

It is also important to look after yourself, as your baby’s upset is likely to be stressful. You might feel exhausted too, as they’ll require even more of your attention. Our keeping calm with a crying baby article has some useful techniques you can try to keep your stress levels down.

Read more about fever in children from the NHS.

For more information on what other illnesses may be causing their fever, this article from NICE is very useful.

If you are concerned, contact your GP or call NHS 111 where you can access urgent medical help fast.

NCT has partnered with the British Red Cross to offer courses in baby first aid. 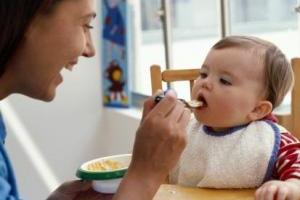 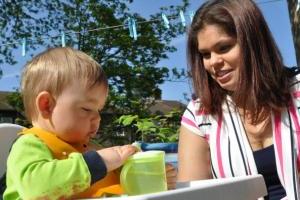 When can my baby have water to drink? Read article 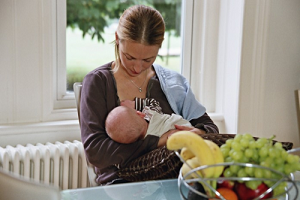 Breastfeeding: why babies may bite and how to stop it Read article