From family and friends, to strangers in the supermarket. Babies can bring out the inner critic in some people. So how do you deal with these new levels of judgement?

You’re just getting to know your little bundle of joy. Finding your way through the chaos of feeding, swaddling, rocking and not very much sleeping. And then your little bubble gets popped – either by a feeling (or an absolute truth) that you’re being judged.

It might help to know you’re definitely not alone. Parents we speak to tell tales of judgement all the time. Here are some of them.

Their advice on how to cope? You might want to silently scream into a pillow. And we won’t judge you if you do. But the main take from the below? Ignore their comments. Put those to bed instead.

When age seems to be an issue

“People assume (and feel free to comment on the fact) that I’m a young mum. I was actually 28 when I had my baby. I tend to treat it as a compliment, whether or not it is meant as one.”

“We had my first at 18, my second at 19 and our third at 22. My third was the first time we had ever been congratulated on being pregnant.”

“I had my baby just before I turned 24. Lots of people assume she wasn’t planned. A lady once said to me ‘children having children’ when I walked around the supermarket, baby in trolley. I just laugh about it with my NCT group who are all older mums. They often have the opposite problem and are judged for being older. It definitely helps to be able to share these things.”

“I have two girls, and both had a dummy for colic. People would comment and occasionally actually pull it from their mouths and say ‘you don’t need that’. I had lots of comments about it affecting their speech, and now they’re enthusiastic and advanced talkers. My advice? Ignore them.”

“My eldest was particularly tall for her age and I found people made comments when we waited to use disabled toilets with nappy changing facilities. Along the lines of ‘You look too old for nappies’. They had no idea how old she was or if she perhaps had a disability. I mostly just smiled and nodded.”

“Our little boy is now 10 months and I’ve realised there is no rule book. Babies run on their own agendas. We are judged by family for co-sleeping, letting him nap on us and holding him when he cries. Other mums query why he isn’t on the move yet – it makes me feel rubbish. He is such a happy chap so I’m just trying to let him guide me and enjoy him.”

“I find being out and about tough as my daughter is very unsettled and cries a lot. I don’t know if anyone is actually judging me for letting her cry – the reality is I can’t stop her. I try to go to baby and child friendly places only, so I’m away from prying eyes. I figure it’s such a short phase, once she’s calmer I’ll be more adventurous.”

“I went back to work when my baby was six months old. Someone said I was ‘selfish’ to leave my baby while he is so young. They weren’t saying the same to my partner. I think these views are outdated and really irrelevant to me, so try to shrug them off. It hurts sometimes though.”

“I have two children under 13 months. Strangers tell me I have my hands full, and ask if they are both mine. I’m also often asked if I knew how babies were made. Sigh.”

“Our little girl doesn’t go to nursery yet. Some of our family and friends have expressed that we’re stopping her developing by not sending her. She is very happy and sociable, so we’re totally comfortable with the decision. We let their opinions be just that.”

“I have twins who are now five. They’ve always been very shy, and used to scream when anyone spoke to them. I felt very judged by people who thought I wasn’t socialising them enough. However, I did what I felt was best and they are now blooming.

I’ve gone on to have two more children and that’s another story of ‘helpful’ comments. At one point I had four under four.”

“I feel judged by some family and friends for breastfeeding my 14 month old. It’s just one bedtime feed but I’m often asked when I’ll stop, or asked why I’m still feeding. Even when my son was eight months family were asking if I was still breastfeeding him. I simply say that I will stop when we are both ready. I’m very proud to have fed both my children for 15 months each.”

“While it feels horrible when people judge you, there are good things about raising a baby in a community. Sometimes you’ll find people actually offering an insight that is genuinely helpful. I took my baby to a cranial osteopath on the advice of someone we met in a coffee shop. It made a big difference.”

“When our breastfeeding journey had to end, I was sad, yes. But actually mainly self-conscious about getting the bottle out in public. As someone who wanted to breastfeed, I felt that people would judge me for formula-feeding. Six months on and I’ve actually never had anything but lovely comments. I think some of the worry was in my own mind.”

“I am a childminder and have three of my own children too. Whenever people tell me I have my hands full I always respond with ‘and they all have different fathers too’.”

“Since having my second baby I’ve become very happy and confident in my parenting. I keep my head up and practise a polite (but less than heartfelt) smile.”

“I think the key to unwanted criticism is to be confident in your response. I often reply with a ‘thank you for your views, I’ll bear them in mind’. Obviously I don’t.”

This page was last reviewed in February 2019 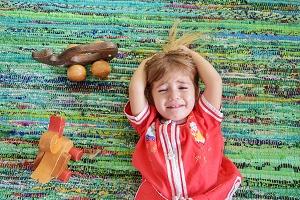