What happens at your 12-week scan? 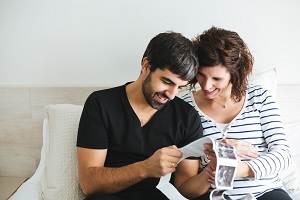 Now comes the moment when you might get to see your baby for the first time – the 12-week scan. We run through what scans are and what to expect on the day

When you’re about 12-weeks pregnant, you’ll be offered an ultrasound scan. This is often just called a scan.

The scan builds a picture from the way high-frequency sound waves from a probe passed over your tummy reflect off your baby in your womb (Whitworth et al, 2015; NHS, 2017a; NHS, 2018b). This creates a 2D image which helps tell you the gestational age of your baby and basically when they’re due (NICE, 2008). Because of this, the 12-week scan can also be called a dating scan (NHS, 2018c).

Do I have to have a scan?

When you first find out you’re pregnant, your midwife or GP should give you a booklet called ‘Screening tests for you and your baby’. This gives you detailed information about the types of scan offered and what they look for (Healthtalk, 2017). It should help you decide whether you want to have a scan.

Many pregnant women choose to have the scan and look forward to seeing their baby for the first time (NHS, 2017a).

A dating scan can include checks for certain conditions, as well as providing the due date. Midwives should provide you with the choice of whether to have a scan. They should also ask at this appointment whether you want to find out about any potential disabilities your baby might have. Then you can make an informed choice about whether to have these scans (NHS, 2018a).

Midwives and consultants can offer alternatives to scans too. This includes handheld dopplers and low-technology methods, such as using a Pinards stethoscope to listen to your baby’s heartbeat (Salvesen and Lees, 2009).

Why will I have a scan?

Scans are useful for telling you about your unborn baby. They can:

When will I be offered my first pregnancy scan?

The NHS offer all pregnant women at least two ultrasound scans during their pregnancy. The first should be offered between 10 and 14 weeks but it is often around the 12-week mark (NICE, 2008; NHS, 2017).

Ultrasound should only be used the first 10 weeks of pregnancy if needed medically. This is because the baby is in its embryonic period and may be vulnerable (RCOG, 2015).

Who can go with me?

You’ll be invited to attend with your partner, another family member or birth partner.

Children are not encouraged to attend. So try to get childcare for any older kids while you have your scan or, if you really need them to come, you could ask the hospital if that’s allowed (NHS, 2017).

What happens during a scan?

Scans usually take place in a hospital. Before the scan, you’ll be sent a letter confirming the appointment, with instructions of where to go and what's required. Most scans are carried out by a sonographer who has been specially trained. The process usually takes 20 to 30 minutes (NHS, 2017).

At the appointment, you’ll be invited into a private room with a bed and asked to lie down. The sonographer will ask you to uncover your stomach by lowering your trousers or skirt to your hips and raising your top over your belly (NHS, 2017). You might find it easier not to wear tight-fitting clothes that are hard to pull up.

The sonographer will put ultrasound gel on your stomach, tucking tissue paper around the top of your trousers or skirt to protect them. The gel might feel cold but it helps the probe to move smoothly over your skin (NHS, 2017).

The sonographer will guide this probe over your tummy using a little pressure but it won’t hurt. The images of your baby will appear in black and white on the screen of the ultrasound.

The sonographers will have the ultrasound screen angled so they can examine your baby carefully during the scan (NHS, 2017). But they might be able to turn the screen to show you the moving pictures. You and anyone else with you might be able to hear the heartbeat, as well as the whoosh of the blood flow to your baby.

What if they can’t see what they need to?

A scan might take longer than usual, or not really work at all if:

A repeat scan can be booked if the sonographer is not able to gather enough detail from the pictures (NICE, 2008; NHS, 2017).

When will I find out the results?

If there are no anomalies or concerns, the sonographer should be able to let you know the results straight after the scan (NHS, 2018b).

Where there might be problems, the sonographer might ask one of their colleagues for a second opinion. You might also be offered another test to find out whether there is an issue (NHS, 2017). You should be given information about any further tests and be invited to discuss your options with your midwife and or a consultant (NHS, 2017).

What are the pros and cons of having a scan at 12 weeks?

There is no evidence to suggest that children who were scanned in the womb have been affected badly in any way as a result (RCOG, 2015).

Yet it is worth bearing in mind that modern scans are at a higher frequency than they were a generation ago. Careful consideration should be given to 3D and 4D images, as the process is more intense. Currently, there is insufficient evidence to confirm that there are no adverse effects (RCOG, 2015).

Advantages of having a scan at 12 weeks can include:

Remember though that scans:

How will a dating scan test for possible genetic differences?

Even if you choose not to have the screening test, any scan during your pregnancy may pick up indicators of a condition your baby might have. You’ll always be told if something unexpected is found unless you request not to (NHS and Public Health England, 2019).

What if the scans show a possibility of one of these conditions?

If the scans show a possibility of an abnormality, you’ll need to decide whether to have a diagnostic test to show if your baby has a condition or not.

Diagnostic tests include amniocentesis and chorionic villus sampling (CVS). Before you make any decision, it is important to know that amniocentesis and CVS carry a very small risk of miscarriage (RCOG, 2010; Payne, 2016; ARC, 2019).

Non-invasive prenatal testing (NIPT) screens for Down’s, Edwards’ and Patau’s syndromes. It’s a newer test that is being rolled out on the NHS.

NIPT only involves a blood test and you can have it much earlier in pregnancy than the other tests. As it’s a blood test, it does not carry any risk of miscarriage (Department of Health and Social Care, 2016; ARC, 2019). However, a diagnostic test would probably still be needed if you wanted to confirm a positive result.

To find out more about the lived experience of having Down syndrome, have a look at PADS which is written by parents and young people with DS to show the reality of their lives.

What happens if I’m worried about the results of the scan?

If you have any concerns or the sonographer finds any anomalies, they have special training to talk with you about what could be a hard and worrying subject. You’ll also be able to discuss things with a doctor within a few days if you do receive difficult news. You will also be offered further scans as sometimes a suspected anomaly is identified but upon closer inspection is found not to be an issue (Healthtalk, 2017; ARC, 2019).

Where can I get extra support or information?

A range of services offer support:

This page was last reviewed in May 2019

Department of Health and Social Care. (2016) Safer screening for women Available at: https://www.gov.uk/government/news/safer-screening-test-for-pregnant-wo… [Accessed 28th May 2019]

Healthtalk. (2017) Ending a pregnancy for fetal abnormality. Available at: http://www.healthtalk.org/peoples-experiences/pregnancy-children/ending… [Accessed 17th May 2019]

NHS. (2018a) Screening for Down’s Edwards and Pataus’ syndrome Avaliable at: https://www.nhs.uk/conditions/pregnancy-and-baby/screening-amniocentesi… [Accessed 26th May 2019]

NHS; Public Health England. (2019) Screening tests for you and your baby. Available at: https://www.gov.uk/government/publications/screening-tests-for-you-and-your-baby-description-in-brief [Accessed 20th May 2019]

RCOG. (2015) RCOG release: The use of ultrasound before 10 weeks gestation is examined in a new scientific opinion paper. Available at: https://www.rcog.org.uk/en/news/rcog-release-the-use-of-ultrasound-befo… [Accessed 17th May 2019] 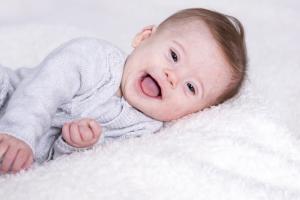 What to expect if your baby has Down's syndrome Read article 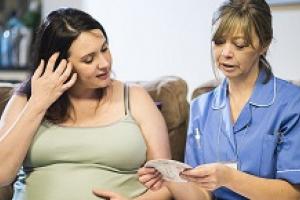 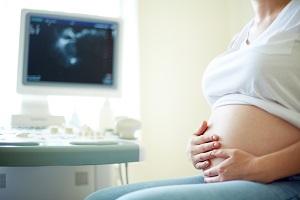