Your experiences: anxiety after birth – it’s good to talk 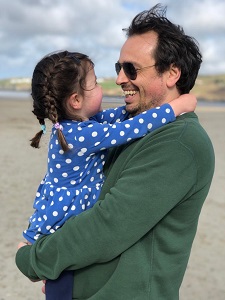 Andy Crisp talks about experiencing postnatal depression after his daughter was born. How he felt and how he found the support to feel better.

When your wife was pregnant with your first child, how did feel about becoming a dad?

From the moment my wife showed me the positive pregnancy test, I was both delighted and excited. I’ve never particularly excelled at anything, and felt that fatherhood would be ‘my thing’. I’m not really sure why. I think I just felt that my people-pleasing tendencies and already fully-formed dad humour would stand me in good stead.

What’s more, I knew that my wife and I were a good team. We’d supported each other through some pretty life-defining moments over the years. I couldn’t have thought of anyone I’d rather be doing this with.

How did you actually feel in the early days after your daughter was born, and what made you feel that way?

I felt helpless. I was acutely aware of not being a spare part in those early days, of giving myself a role. I felt anxious, like I should always be doing something. Like there wasn’t a moment to lose.

I think the excitement disappeared fairly quickly once they came home and reality set in. I’ve always been a little haphazard, and the need to establish routines felt daunting.

The intensity of everything was such a shock. Finding out quickly that funny faces and stupid noises don’t really cut it with a newborn. The scale of responsibility, the sudden realisation that everything that I did from here on in would shape my daughter’s future self. That just all hit me like a ton of bricks.

We’d decided that in those first few weeks we’d see a few family members at hospital and then shut ourselves away to get to know each other. I think for me that probably cranked up the anxiety. I felt ashamed about how I was feeling and was trying to put on a brave face for my wife.

What was the hardest thing about the situation?

The feeling that at a time when my wife and daughter needed me the most I was failing miserably. The guilt that I was asking my wife to brush off a difficult labour to take care of herself and our daughter (and probably me too, thinking of it). Just that suffocating sense of shame.

What made you realise something was wrong?

The tears. They wouldn’t stop. I’m certainly not a man’s man, by any sense. I’ve been known to shed a tear at movies and TV shows. (In my defence the start of Up is really sad, and I was watching at altitude – it messes with your emotions.) I’m proud to say that I cried regularly throughout the pregnancy, with relief, happiness and excitement.

But these were helpless tears, and ones that were always there. I was lying in wait for my next wobble or moment of self-doubt.

Did your wife notice how you were feeling?

My wife was amazing. I think she quickly saw that something wasn’t right. That my fecklessness was more than met the eye. Don’t get me wrong, I’m sure she was anxious and worried under the surface, but she did a great job of hiding it.

She took on more than she should have done. She relieved me of a crying baby before the end of my ‘shift’ on numerous occasions. And she let me complete the regular ridiculous errands I’d tell her that I needed to do.

She also suggested I speak to a friend. This was the first step to getting myself back on track.

How did you start to feel better about things – what did you do?

I phoned a friend. Specifically, one who was a recent father himself. I explained how I was feeling. That I was missing the mark in my quest for perfection.

My friend didn’t pull his punches. He told me that the sooner I accepted I would never be the perfect father, the sooner I’d be able to get on with doing the best I can. So that’s what I did.

How long did it take for things to get easier?

To be honest, the change was pretty immediate. I felt the pressure release quite quickly, and focused on the things I could do to help.

Gaining my sense of purpose and getting that connection with my daughter were definitely linked. I was able to do things for her, to make her life easier, even if that just meant changing a nappy, or perfecting my winding technique.

I also felt less anxious when we were alone. Those hours in the dead of night I spent with her snoozing on me while I watched TV were such an important time.

After the first few months, I felt like those early days were firmly behind me. I still had doubts and anxiety, but those moments were now in the minority.

How were things as a family of three when everything settled down?

For the first few years of Ffion’s life, we had our fair share of challenges. We had hospital dashes, family estrangement and moments when both my wife and I probably wondered what the heck we’d signed up to. Yet we faced them together and built so many happy memories together.

My wife jokes that I can’t really remember any of the bad times. Perhaps I’ve wilfully blocked them out.

Ffion and I developed a strong bond. I became besotted, boasting about her every milestone and achievement. I’d pinch myself – still do to be honest – that we’d been so lucky to end up with our gorgeous, cheeky, smart little girl.

Ruth and I found time to spend together too, and that had such a positive effect. I’ll be forever grateful to my sister-in-law for facing her own fears and babysitting overnight, to allow us to get away on our own.

What advice would you give other new dads so they could learn from your experience?

It’s good to talk. Speak to someone, anyone, about how you’re feeling. Don’t suffer in silence, and don’t be too hard on yourself. 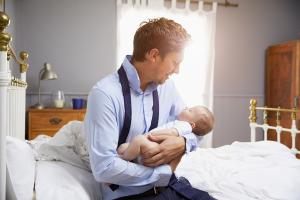 Postnatal depression in dads: 10 things you should know Read article 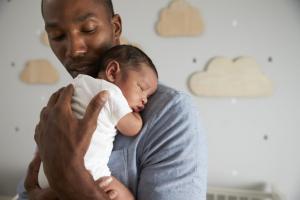 Dads: emotions and how you might be feeling Read article