Sara Campin, 36, suffered with anxiety and depression after both her children were born. Here she highlights how getting help early the second time around, made all the difference. 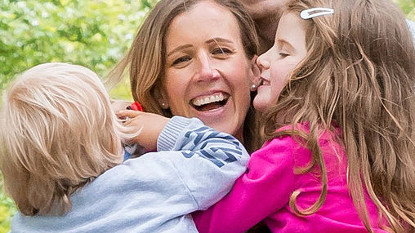 A few of the vivid memories that are etched onto my brain from the first four months of my daughter’s life include bursting into tears nearly every morning when my husband was leaving for work and the look of confusion in his eyes,  trying to hold back the tears when I met up with friends who told me how much they were enjoying being a mum, spending every single moment that my daughter was napping (for all of 20 minutes after a 40 minute battle) googling sleep with matchsticks propping up my eyes, pretending to the health visitor that all was ok and a constant feeling of guilt and failure.

The truth is I wasn’t coping, but I was so afraid to admit this to myself and to others that I felt I couldn’t ask for help. I had wanted to be a mother for so long. I was a successful and independent woman and yet there I was, finding it all just too much. How could I admit that? I felt so confused and alone and started hating myself for failing so terribly and not enjoying being a mother more.

Thankfully, things did improve, especially once my daughter was sleeping more when we finally got help from a sleep consultant at five months. But my biggest regret is not taking greater care of myself, not admitting that I wasn’t coping and not asking for more help. If I had, I might have found greater enjoyment in those early months of my daughter’s life.

With my second born, I was so convinced things would be different, but then silent reflux kicked in big time! I struggled to get my son to stay on the breast for more than a few seconds at a time and he screamed blue murder after every feed, unless he was sat completely still and upright in a chair on his own with no one touching him. He was constantly snotty and his breathing sounded like Darth Vader.

I became totally obsessive about his feeding, his health and his sleep and the anxiety ate me up. The doctors and health visitors initially dismissed me as he was putting on some weight, but no one seemed to understand the sheer effort and commitment it was taking to make this happen. It felt like everyone just thought I was a neurotic mother. My daughter also found the constant crying hard to bear and became hugely jealous of the attention my son was getting. There were plenty of days when they were both screaming at me and I felt totally overwhelmed, lost and alone and just wanted to crawl under a rock.

Having been through and then reflected on some tough and dark times with my first born, my husband and I were so much more aware and able to discuss our mental wellbeing the second time around. It was with our new openness and his support that I felt able to go to the doctor and ask for help.

My GP was amazing. I was prescribed medication and was quickly enrolled on a Cognitive Behavioural Therapy (CBT) course for anxiety. I was nervous about taking a drug that would alter my brain chemistry, but was able to limit this to a low dose and it was definitely the right decision for our family at the time. Obviously, these steps didn’t solve all the challenges we were going through, but they did mean I was much more able to cope with them. I know I was lucky and was only at the lower end of the scale of mental health problems, but if I hadn’t got help when I did, who knows where we would have been.

NCT’s #HiddenHalf campaign is getting postnatal mental illness out of hiding. Click here to send an email to your MP, so that new mothers suffering from mental health problems can get the help they need.