Two-mum families: how to tackle questions like ‘what will they call you?’

Claire Lynch shares her experience of being a two-mum family and offers her advice for tackling those awkward personal questions.

What will the baby call you?

When my partner was pregnant, we were often asked if we would both be called mummy once the baby could talk. Some people can find it difficult to imagine a family without traditionally gendered roles. So to them, asking about names is really a way of expressing that.

If you or your partner speak another language you might already be planning to use another word for mother in your family. Some parents simply use their names, for example mummy Jo and mummy Emma.

In our case, our children decided for us. As soon as they could talk, they named us mummy and mama and they’ve been quick to correct anyone who gets us muddled up ever since.

Parenting is a series of challenges. Frankly, what you call yourselves should be the least of them. Choose the words that work for your family and feel confident in asking others to use them too.

I do understand that when people say, ‘I can’t remember who’s who, I’ll just call you both Mummy’; it’s probably to cover their own embarrassment. I also know that when people don’t try to get this right it confuses, or even upsets, our children. It goes without saying that we are distinct people to them and the names they call us are as meaningful as those used in a family with a mummy and a daddy.

How did you get pregnant?

It still surprises me that anyone would ask such a personal question but believe me, they do. Most people wouldn’t consider approaching a pregnant woman and asking her for details of the conception, but curiosity seems to overtake manners when it comes to quizzing same-sex couples. Remember that you’re not obliged to satisfy the interest of even the most persistent stranger in the supermarket.

There might be legitimate (rather than nosey) versions of this question. For example, when registering the baby’s birth or during antenatal appointments if the birth mother is not also the biological mother. Even so, you should expect the same respect and privacy as any other parents get.

There are many different ways to build a family. But you might find people struggle at first if your family structure is not familiar to them.

There might be a dad in your family set up, a male co-parent, a known donor, or the father of children from a previous relationship. Alternatively, women who conceive by anonymous donor may prefer the term ‘donor’ to ‘dad’. This term might clarify the line between the genetic origin of a child and their parents, neither of whom identify as a father.

Families of donor-conceived children understandably feel immense gratitude to the person who has provided the opportunity to start their family. They may also feel strongly about preserving parental ‘names’ for the people who will parent the child throughout their life. Try to use the language you would like others to use and they will follow suit.

How did you decide who would carry the baby?

Variations on this include: ‘Aren’t you lucky she’s doing all the hard work?’ ‘Did you toss a coin?’ and ‘you can have the next one’. For many same-sex couples the question of who carries the pregnancy can be hugely emotive.

The decision might be one of necessity, a matter of illness or infertility. It might have been the source of great heartache for one partner to ‘sacrifice’ this role. Non-pregnant mothers can often feel relegated to the role of observer during pregnancy and the assumption that they have ‘opted-out’ can be hurtful.

For others, this might have been a straightforward decision. This too can be surprising to heterosexual couples who do not have the choice to make. Not wanting to be pregnant does not mean you are not maternal. You are not less of a parent because you didn’t give birth.

That said, for most women there’s some adjusting to do between the images of motherhood they see around them and the mother they want to be. You don’t have to be like the woman on the nappy adverts to be a great mum.

When my partner was pregnant, it was important for me to shape a role around what I could do for our babies rather than focusing on what I couldn’t. So during your partner’s pregnancy, this might include cooking healthy food, decorating the nursery, and taking time off work to attend scans or hospital appointments.

You might also like to sign up to a weekly email service to keep up-to-date with the baby’s developments. It also helps you keep track of the symptoms your partner is likely to experience so you know how best to support her.

There’s plenty of work to go around with a new baby so take some duties on as your own. Set aside time each day for skin-to-skin cuddles or take responsibility for bath time. This will help you to build your confidence as a new mum and allow your partner time to rest and recover from birth.

Claire Lynch is a writer and academic. She lives near Windsor with her wife Bethan and their three daughters. This article is part of series she has written about her experiences as a same-sex parent for NCT. Her book Small: On motherhoods, telling the story of her motherhood journey, is out now and published by Brazen_Octopus books. If you'd like to share your story, please do get in touch: nctmatterseditor@nct.org.uk

Read the free guide from Stonewall ‘Pregnant Pause: A guide for lesbians on how to get pregnant’ covering all aspects of pregnancy and childbirth from conception to starting school

Same-sex parents: books to share with your baby Read article 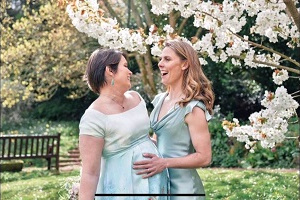 Two-mum families: what to expect when you’re not expected Read article